Sanjamatsuri, which is sailed in May every year and tells Asakusa early summer, is said to have its origin as the "boat festival" that was held in the first year of Masakazu (1312) based on the myth of three company's rights , And Heisei 24 (2012) was Sanjamatsuri Sapporo seven hundred years It marked the anniversary of a memorable pleasure.
Keika, Asakusa Shrine and the Asakusa Shrine Council, with the cooperation of the Asakusa Tourism Federation and related groups including Asakusa Temple, and the enormous support and cooperation of all the members of the Asakusa Shrine's revered families This time, as a "Buddhist festival" as a "boat transit", and as a Buddhist priest and a shrine based on the auspicious birth of Asakusa and the establishment of Asakusa-ji temple in the same year in the same year he successfully went on a sale.

In the Edo era, on the eve of the grand festival on March 18th (17th September), which is our fairy day, the Shinto shrine of Asakusa Shrine was transferred to the Kannon main hall outside goddesses of Ichinomiya, Ninomiya and Sannomiya three bases Mr. Kannon and three company's authorities Three gods stayed together all night long. Also, at this time, "Shinto shimbun aza dance (present city Folklore intangible cultural heritage)" is dedicated on the stage of Dangyo.
On the day of the next great festival (18th), a mountain car visits Kannon Main Hall before each of the town councils, compete for its gorgeousness and luxury with each taste, play entertainment, leave the Demon Gate (present Benten gate) I went back to my town.
After that, when three shrine shrines were unloaded from the main hall of the main hall at "Odori", it was carried to the boat hall of Asakusa Gate (now Asakusabashi), headed by Ichinomiya. Then each mikoshi was placed in a boat serviced by a fisherman living in Omori (Shinagawa) waiting, rowed up Asakusa River (now the Sumida River), landed from Komagata Kishi or Hanagawa-do shore, then returned to Asakusa Shrine It is said that it was.
At the time, it was also called "Kannon Festival" or "Asakusa Festival" at the event together with Asakusa Temple, but it was abolished for some reason at the end of the Edo period, but once it was sown in the Showa era, From then on, the mikoshi only passed Mrs. each town. 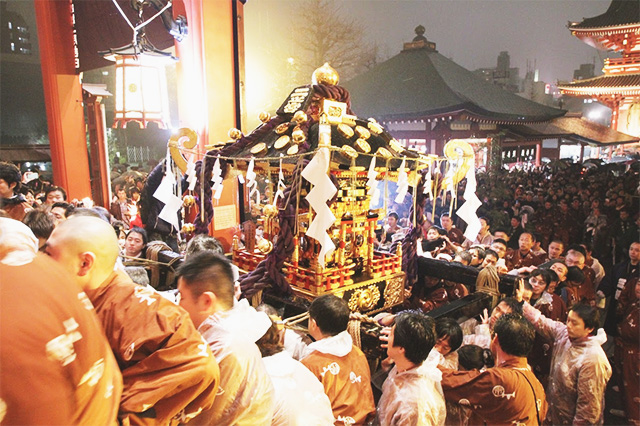 In Heisei 12, Asakusa Shrine headquarters three parts of Asakusa Shrine, a part of the ancient "boat festival", Asakusaji main hall "Doho" "entrance" "Susuku And the shrine to worship overnight revived by the hands of Asakusa 's fathers.
It broadly spreads the history and origin of Asakusa both inside and outside, as well as a shrine praying for the further development of the Asakusa town, every year from mid-March to the end of March it is being sailed every year.
The event that Buddhist and Shinto rituals are performed at the same time is rare even in nationwide, along with the customs, culture and traditions rooted in the gods separation previous Asakusa is reproduced, the Asakusa Shrine example takes place in May every year festival ( Sanjamatsuri It is also a prologue to.