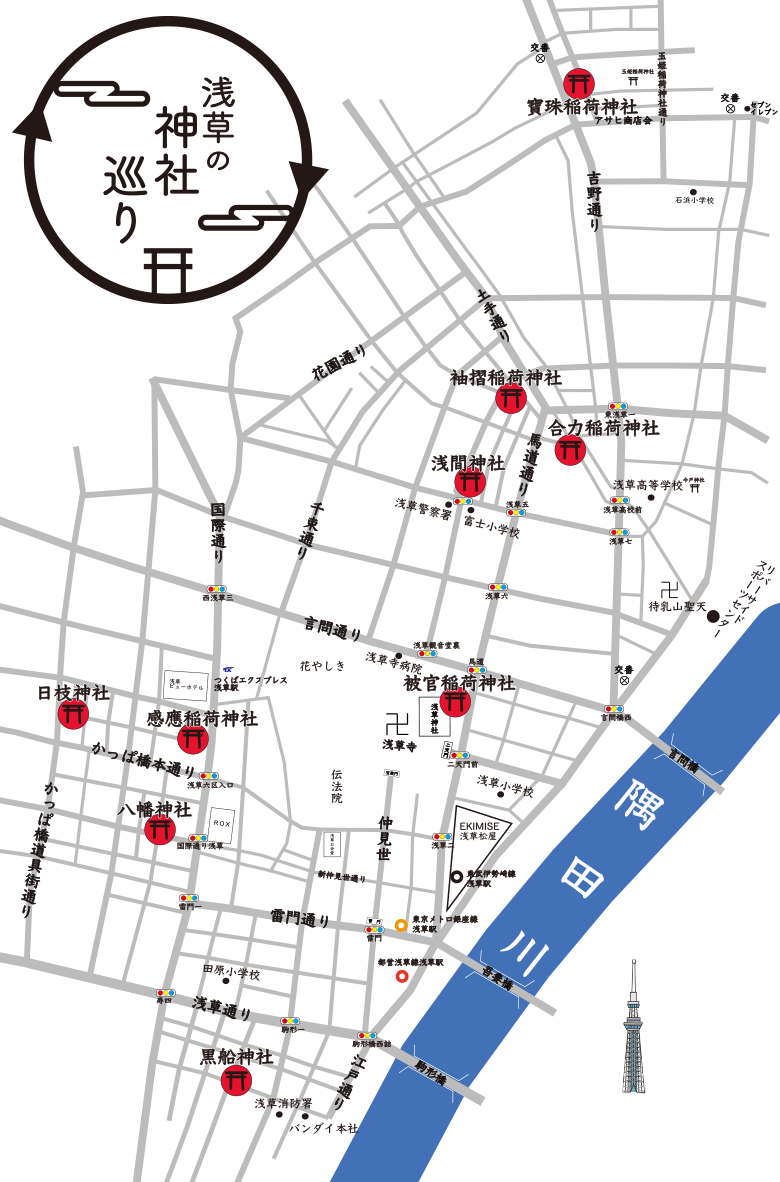 In Asakusa, there are many Shinto shrines called Shinto shrines where shrines are usually not resident.
At the occasion of the festivities and prayers, the Asakusa Shrine's Shinto shrine visits the shrine and performs the sacred matters.
Every single shrine has a history, and it is protected by the townspeople as a place of prayer.
Why don't you try to discover the new charm of Asakusa, with the Edo spirit remaining and taking a walk through the lively Asakusa town while touching the atmosphere of each Shinto shrine that is quiet there? 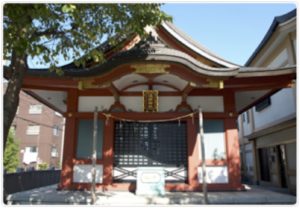 During the Edo period, when the faith of Fuji was most active, the "Fuji-ko" was formed for the purpose of worshiping Mt. Fuji, and the Asama Shrine was solicited around the country. Mt. Fuji open 6 Moon 1 Day (now 7 Moon 1 On Sunday), people who were not able to worship Fuji were visiting the local shrines of Asama Shrine. Asakusa Fuji Asama Shinto shrine was founded as such a Fuji mountain shrine. Initially, it recruits and distributes in Miyoshi-cho, in front of the current storehouse ( Receiving the Spirit of God ) It is now the place where it was once a forest-like small hill similar to Fuji by the order of the Shogunate ( Asakusa 5-chome ) Has been moved to 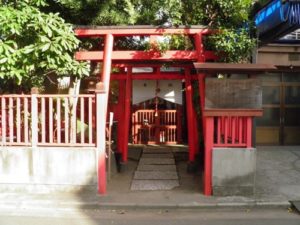 It is said that Shinden began with the fact that the workmen who lived in Yamatani-mura during the Edo period (1558-69) served as guardians of the town. In response to the horse riding of the Tokugawa 4th Gen Shogun, "Araki" being killed at Senju inn at the time of Nikko Sakai, the horse head Kannon was also included as a storm head.
It is located under the embankment of Japan Embankment, and is well-known as "bank Inari".
In the precincts, the power stone of Sannoya Konosuke, who was named the best in Japan during the Edo period, has been discovered. 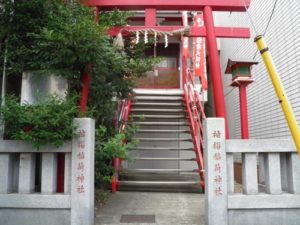 About 800 years ago from now on, when Gen Yori Asaha was in Izu, I sculpt the body of the Inari inari that would not be a rice grain who is also a military resource, and erecting one company in Soju Hojo was our rise and fall It is said. Later, when Ise Shinkuro (later Hojo Hojo) moved to Odawara Castle, it was revered from the location of the castle to the shrine, and the god was named as the Inari.
The god of Inari appears in the dream of a person named Konishi-San-Eemon who came to Odawara Castle Oshiro Castle, who believed in this Inari, and there was a message saying, "Go me to the edge of Sumida," Tenishi, 18 Decided to set up a temporary hall in our place with the divine body and the bell. When I tried to build a temporary hall, a Buddha appeared from the ground, and when I washed and cleaned it was a eleven-faced Kannon, and I moved to the headquarters of Inari and the headquarters of the Buddha and the joy.
Later, I was sent to visit here from Tokugawa Yadasu, who became a miracle, since I received the townhouse pardon from the Tokugawa ruler. Because of the repercussions of the cereal riches and fulfilling the desires and eliminating any disasters, the worshipers are the crowds and the shrines go to the shrine, so the "Sodesuri Inari" becomes the god, It changed to "Covered Inari". 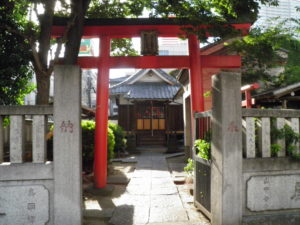 It has been called "Kanei Inari" from ancient times, and has been settled in Edogo Shibazaki (present Chiyoda-ku Otemachi) in Toshima-gun, Musashi country, but Tensho 19 (1951), Bunsei first year (1 After being transacted twice with the 592), he was settled in the place of the current third year of the calendar (1657), and has gathered a rich faith as a guardian deity. Even though it is burnt down by earthquakes and air raids, it is also being rehearsed each time by the sincere respect of the children. 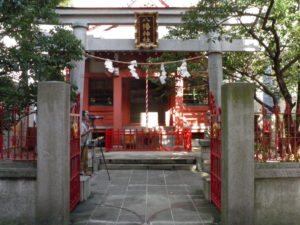 Founded as a guardian of the site of Tajima Sankyakuin Votive Temple on August 9th (1700). It was located in the Higashimachikai Tohoku corner until the end of the Taisho period, and he dedicated the deity deity deity God of Bun-no-Kuni Usa Hachimangu to this place. Asakusa Shrine Company, Inc. will receive the life of one year in 1887. It was rebuilt in February 1955, with a clean-up donation by local residents as a result of the night battle fire on March 9, 1940, and the current shrine in May 1945, The office has been completed. 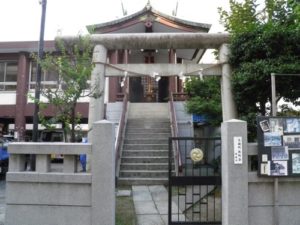 It is said that during the Muromachi period, it was said that it was enshrined in the grounds of Tendaisune Toko-in, which was near the current Marunouchi Tokiwabashi Bridge, and solicited the spirits of Okichi Hiyoshi Taisha. After that, when Ieyasu Tokugawa added Edo Castle during the Keio period (1756 to 6114), the company moved to Nihonbashi Kodenmacho with Toko-in.
Affected by the great fire of Edo in the third year of the calendar (1657 years), it has been revived after that and is being scolded in the present place.
The torii was erected in 1955, and the wooden main building damaged in 1944 was remodeled into a reinforced concrete structure, and it has become the present figure.
The display of the “Aozora Old-fashioned Photo Studio” created by the local Shibazaki Nishimachikai in the precincts is tasteful and shows a lively atmosphere. 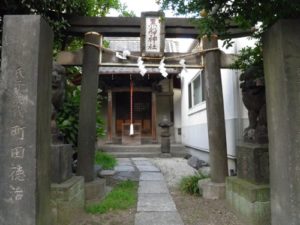 It was originally called "Kurofune-sansha Inarisha", and after Heisei Susumu cooperated with Fujiwara Hidego in attacking Shomon's headquarters in Tenkei 3rd year (940), Kurofune Inari Daimyojin was founded. Hidego Fujiwara is said to have solicited the company, seeing Reimu that has a white coral in a black ship loaded with treasures. In the Edo period, it was called "Kurofune Sansha Inari Daimyojin" as "Kurofune Sansha Inari Daimyojin", and it came to be called by Shizuko. It was scorched in the southwest of Asakusa-dori Kurofune-cho riverbank in 1773 (Kyoho 17), but it was burned by the great fire of March of the same year, and then it was scolded at the current place, scolding the substitute land. It is supposed to be
The present torii was rebuilt in 1991 because of deterioration. 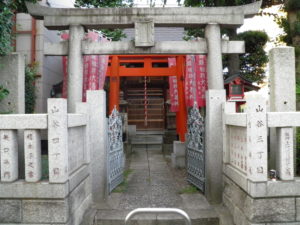 According to the ancient documents of the company's warehouse, it was believed that it was enshrined as a guardian of Asakusa-cho in Tensho 17 (1589).
Asakusa Town, which was on the remains of Komagata Hirokoji Koakeyashiki in Asakusa Chito-in (now Densho-in), became a site for the Shogunate, and the entire town moved to Kameido Village I was ordered. However, because the relocation site was a difficult land to live in, the lord and residents petitioned the relocation of the town to the consignment office in the second quarter of Tenwa (16 8 8 2 Is the current sanctuary.
During the Tokyo Great Air Raid in the end of the Great East Asia War of 1955, all buildings in the precincts escaped fire by the protection of the sacred shrine of Oshintoku and the frantic firefighting activities of the children.
At Okunoin, we ask for “Shiroi Inari”, which is solicited from Kyoto Fushimi Inari Taisha.
At the beginning of the festival, local neighborhoods play a central role in gathering small children. 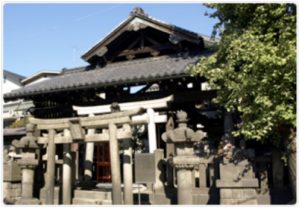 When the wife of Nimon Shingoro was seriously ill and went down to the floor in Ansei 1st year, I prayed for the Fushimi Inari Shrine in Yamashiro (now southern part of Kyoto) and the disease was totally relieved. Then, in the same two years, the people of the town also offered the meaning of gratitude, and invited Fushimi Inari Shrine from here to worship the deity God. After that, a small company was founded and named "Kan Inari Shrine", and it is now enshrined in its grounds as the last company of Asakusa Shrine. Although the origin of the name is unknown, it is better to understand that it is employment / progressive from the fact that the subject is “to be covered” by the “official”. The torii in front of the Inari Shrine was dedicated by Shingo Shingoro.